Adults briefly interrupt what they are doing and give the passing train an acknowledging glance, no more. The world over however, children stop in their tracks, their faces light up as if it was their birthday, and they wave enthusiastically.  This appears to be a universal truth and makes train travel an eternal pleasure for me. Sitting in my air-conditioned carriage I pass a luscious green, monsoon soaked landscape, that seems to be pleased to receive the regular distraction of the trains visit.
The rainy season has started. The world looks greener, more luminous in Thailand at this time of the year. It even sounds different. I wake up to the chanting of the monks, acknowledging the passing of the moon and feel that I have slowed down. Time is still out of my reach but I have managed to stay in the moment, a little longer and more intensely than before.  There were times when I felt truly happy and being in touch with myself; a rare moment, but one that I know exists.
The train keeps moving, sounding its whistle as regularly as a clock. Looking through the window I see a tropical dream. I love these moments, and I keep telling myself, you are here now.  But the train has already moved on.
I am on my way to Bangkok on board the ‘sprinter’ from Chaing Mai. The last week at ComPeung has had a distinctive Japanese feel to it, with the arrival of eight university student and their professor and his family from the Hosei University in Tokyo.   Having my my projects wrapped up, I relished the opportunity to participate with the students in their workshops, which formed part of their inter-cultural studies. It also presented the privilege to work with some of the monks from Wat Doi Saket. Ever the opportunist, I completed a series of portraits of the monks. 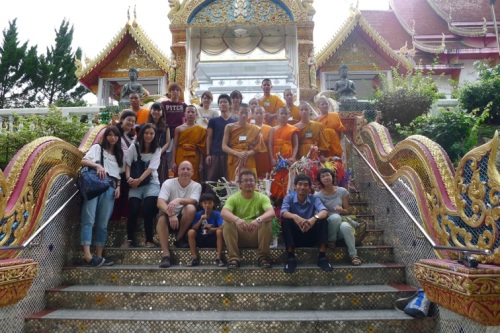 Back on the train, it’s hot and humid outside, a fact that I am reminded of every time the train doors opens and interrupts the air-conditioned comfort with a blast of tropical reality.  The landscapes has become a blur of rice fields, train stations and giant images of the Queen, who’ll celebrate her 80th birthday on the weekend. She farewells me with an authoritarian glance, in every town that we pass through.
One of the best experiences in participating in an artist in resident program, is the friendships that I make, and Thailand was no exception. With a smile on my face, I boarded the plane back to Australia.

Come and see the tigers, pat the snakes and dance with the lizards, or something like that.  He saw me trying to cross the busy road and met me half way, waving a brochure in my face.  “it’s very exciting and we can take you there now, sir.'” Sadly I had to disappoint the tourist tout, for I had a far more thrilling adventure lined up for today.  Minutes, and a lot of bargaining later, I was onboard a low flying Tuk Tuk, who’s pilot steered me straight to the computer place.  ‘Here we are, sir’  he proclaimed proudly, ‘DC Computers!’ There was obviously some misunderstanding, “not blue tooth, sore tooth! ‘ I said “I need to go to the dentist hospital.’ Easy mistake to make, he manoeuvred the chariot of exhaust fumes around a few corners and dispatched me in front of the clinic.
On arrival at the dental hospital an ambulance appeared with blue lights flashing, and I thought that this poor guy must have really a real bad toothache.  Turns out there was also a general hospital in the same building; a sore tooth seemed to be the least of his problems.  Having  things put into perspective for me, I bravely pushed open the door to the dentist clinic.
There was and old man who had a hole in his tooth,
and in that tooth was a note,
and on the note it said:
There was an old man who had a hole in his tooth,
…..
Stop it, why was I thinking of that now!
I had promised, or was that threatened, myself that when in Thailand, I would take myself to a dentist. At least the pain was only going to be in my mouth and not so much the hip pocket. Did I mentioned that I don’t like dentists?  OK, so who does!  It was a good exercise for living in the moment, just one step at a time, or one tooth at a time as it turned out.  Really it was a breeze. The clinic was super modern, better that any that I had seen in Australia.  The dentists, I got to see two of them, and their staff, extremely caring. It was almost a pleasure being there.  I left with a new bright, slightly sore smile and less one wisdom tooth.  Mind you that thing was so small I think it’s IQ barely managed 20!

The sweet scent of incense descended on the town like a soft, silk blanket. Later in the evening the fragrant air would be enriched by the chanting from the monks, but now it was still early morning.  They came on foot, on the back of trucks and bikes, bearing offerings of flowers, food and money.  The steps up to the temple were reverberating with the sound of heavy breathing and the loudspeaker encouraging people to the top to receive their blessing from the monks.  Today is Asanha Bucha Day, one of the most important days in the Theravada Buddhist calendar. Asanha Bucha means to pay homage to the Buddha on the full moon day of the 8th lunar month, it celebrates Buddhas first sermon.
I was up with the geckos and by 5.30 am on my way to the temple.  The monks were busy preparing the temple for this auspicious day.  I was just happy to step back and observe.  By seven o clock, the steady trickle of worshipers had turned into a shore of multicoloured devotees.  The young, wearing their best outfits, were instructed by they parents, and the old were guided by the young.
I was back on the mountain again later this evening, sitting high above the temple.  Looking down at the giant Buddha who faced the setting sun.  In the distant hills a thunderstorm approached, while near my dangling feet, dragonflies preformed their eternal dance.  A prefect day.